The Many Types of Apps That Can Be Developed with Python 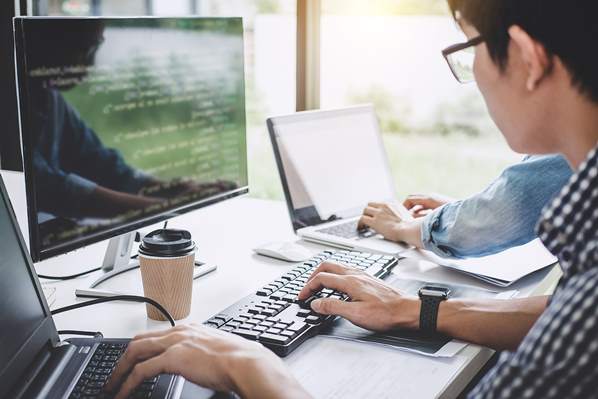 From professional-level applications to social media apps on an iPhone, applications have become a part of everyday life in today’s technology-based world.

Businesses have discovered just how incredible applications are for reaching their target audiences and helping them achieve their goals as well. Now more than ever, companies are looking to build applications of some sort, whether mobile or web apps.

There are many programming languages out there to choose from to build said applications. However, Python has become a favorite amongst developers for these tasks and one of the most popular choices for development in general. Python is a high-level and object-oriented programming language used for a variety of different applications. Python is known for its simplicity and easy-to-learn syntax for simplified reliability. It has many different use cases, including Machine Learning, Data Science, Artificial Intelligence, and application development.

Which Kinds of Applications Are Developed with Python?

Many development companies, such as BairesDev (Learn more here: BairesDev), have found that Python software development and application development have become some of the top requests from clients of all kinds. Below are just a few examples of the many different types of applications that are developed using this popular programming language.

1. Administrative Applications – Administrative tasks typically involve large data sets that are sometimes difficult to manage (and are incredibly tedious) without the help of an automated program. Python is ideal for the development of such administrative applications. It allows developers to easily interact and communicate with the operating system via the OS module. This enables developers to interface with the operating system that Python is currently running on while making the operations simple and accessible thanks to simplified reading and writing in the file system.

2. Entertainment Apps – There is an enormous demand for applications for entertainment, especially when it comes to audio and video content. Python is a great choice for these types of applications thanks to its incredible available libraries. Many of the biggest applications available to the public were originally developed in and still use Python to this day, including Spotify, Netflix, and YouTube. These applications are incredibly enormous and work well thanks to Python’s clean and expressive syntax for simplified application development.

3. Gaming – Python is the programming language of choice for many of today’s popular video games, including Battlefield 2, The Sims 4, and World of Tanks. Python’s scalability makes it a favorite for development in the video game community. It can be very helpful when it comes to designing complex gaming levels as well as gaming tools. Python’s real-time testing helps speed up the video game development process while its robust libraries and tools make things easier for developers.

4. Blockchain – One of the most trendy technologies in recent years, blockchain adds an extra layer of security to data exchange with the use of cryptography and its decentralized nature. For businesses or organizations that require this extra layer of security, Python is a good choice for development. Its simple, clean syntax helps blockchain developers facilitate requests and communication within these apps flawlessly. Flask, a lightweight web application framework, is one of the most popular Python frameworks for blockchain apps. It facilitates HTTP requests and offers a wide range of attributes for these applications.

5. E-commerce Apps – E-commerce has become one of the fastest-growing industries over the last decade. These apps make shopping easy and convenient for end-users while helping to drive profit for businesses of all sizes. E-commerce applications must be scalable as the company requires while agile enough to meet the demands of the online shop. Python is an ideal solution for these apps as it allows developers to create interactive and appealing applications while providing the required scalability and speed.

6. Command-Line Applications – Command-line applications (sometimes known as console applications) are computer programs utilized from the command line. This means that they do not have any kind of graphical user interface. Python’s Read-Eval-Print-Loop (or REPL) makes it a suitable choice for these applications as it enables developers to work within these requirements.

7. Automated Testing Applications – Python has become the programming language of choice when it comes to testing automation. This process uses the language to execute app features with a script rather than needing a human being to manually test each aspect. In combination with automation tools, Python provides a wide selection of libraries and tools for the performing of automated tests to help get other apps published and deployed into production at a much faster rate than the manual process.

Python is incredibly useful and preferred in the world of application development. It is fast, flexible, and easy-to-understand for developers while allowing them to create many different types of apps. With a plethora of available libraries, modules, and toolkits, devs know that they can count on this incredibly versatile language to accomplish their programming goals.

Malcom Ridgers is a tech expert at BairesDev specializing in the software outsourcing industry. He has access to the latest market news and has a keen eye for innovation and what’s next for technology businesses.