The ABCs of Dealing With Difficult People

People cannot be made to change their behavior. However, there are techniques that you can use to better deal with them when they are exhibiting difficult behavior. 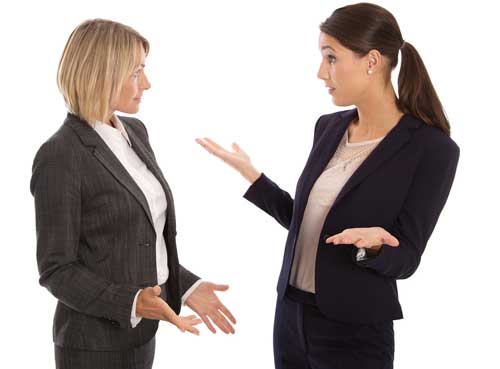 This is especially true when dealing with emotional situations. In such instances, it is helpful for you to maintain control of your emotions and get the other party focusing on underlying issues and resolution to them rather than arguing or disagreeing.

The following are some ideas that might help when you encounter someone whose behavior is less than desirable.

Assume that the person is having a bad day and is not intentionally trying to make your life difficult.

Begin statements to them with positive language so as not to escalate any emotion or aggression on their part. For example instead of saying, “You are being an idiot” try “When you use that type of language or tone; it is hard for me to not get defensive.”

Create a positive communication environment by focusing on some positive aspect of what they are saying rather than on the negative. For example, when dealing with a customer who is yelling and saying things like, “You people are all idiots” (referring to your organization), acknowledge their emotion and respond with something like, “It sounds like you have had a bad experience with someone here at _____. I apologize for that situation, now how can I assist you?”

Discuss options for resolution of the situation. For example, if a co-worker is upset because they feel you did something to undermine their efforts on a project try saying something like, “If I did something to send the impression that I did not support your ideas (efforts) I apologize. Can we talk about what happened so that it does not occur again?”

Encourage others to share facts about a situation rather than offering subjective criticism without trying to resolve a problem.

Find mutually agreeable alternatives to resolve disagreements or conflicts by eliciting the other person’s ideas of how something might be corrected or resolved.

Gain trust by sharing examples of ways that you have/can assist the person in resolving the issue.

Hold retaliatory feedback which might escalate emotion on either side. Instead concentrate on the cause of the problem and ways that it might be resolved and prevented in the future.

Initiate a dialog that shares you reluctance to participate in verbal sparring and instead shows your willingness to partner to resolve the situation. For example, if your supervisor is giving what you consider to be unwarranted criticism for a task or project, listen and at the appropriate time, interject, “May I share my perception of the situation?” then go on to give objective examples of what happened. Do not make excuses or get into a defensive posture. Instead, let your supervisor know the facts as you know them and take responsibility for any portion that you were responsible for.

Justify your position or actions with quantifiable and objective points rather getting into a childlike “did not/did too” exchange.

Keep discussion focused on the issue at hand and don’t bring up past events or issues. For example if your spouse, roommate, or significant other is upset because you seem to repeat negative behavior (e.g. leaving your dirty dishes on the counter rather than putting them in the dishwasher) do not try to deflect behavior to something they have done in the past. For example, “Oh yea, well what about the time you.”

Learn positive communication skills and use them in order to more effectively enhance your relational experiences.

Monitor verbal and non-verbal language when dealing with others so that you do not inadvertently offend or upset someone.

Nurture opportunities to provide positive feedback to those who sometimes seem to be difficult to deal with. By being seen as an ally rather than an opponent or challenge, they may be less likely to demonstrate negative behavior when dealing with you in the future.

Offer ways that you can assist the difficult person in an effort to “mend fences” or develop a positive relationship.

Prepare some standard responses in advance for different situations that occur when dealing with the difficult person. This prevent s you from being caught off guard and speechless when something comes up.

Quit trying to “get even” with someone who has caused you problems or hurt your feelings, if this is a pattern of behavior that you have developed. Two wrongs do not make a right and can permanently damage or destroy a relationship.

Reply to criticism in a non-emotional manner and look for ways to correct any behavior that you have exhibited that led to the criticism.

Search for allies who can come to your aid or defense if necessary. This does not mean to “gang up” on the difficult person, but does mean to have a plan for future action. This is especially important if you think the person is capable or prone to violence.

Trust “gut” instincts about people and avoid situations that might be unpleasant or unproductive.

Use opportunities to open dialog that will help the difficult person see the impact that she/he is having on you or others. For example, when you re not in the midst of a difficult encounter with the person, ask them to get together to discuss something that is on your mind. In that meeting, calmly and unemotionally, explain one aspect of their behavior that has caused you problems or hurt your feelings in the past. For example, “You may not be aware of it, however, when you say _____ like you did in the staff meeting yesterday, I feel that you do not value my opinion or respect me as a viable part of this team. Please help me understand why you said that?”

Value input that the difficult provides even though they might not express it appropriately. Maybe there is something that you are doing that is contributing to their feelings and actions. Give what they say some thought and make any necessary adjustments.

Xplain that your intent is to rationally resolve a situation rather than to argue, when a difficult person approaches you and seems intent on having a heated exchange.

Your efforts to calm someone down can be enhanced through the use of empathy. For example, “I can see that you are upset. Please take a deep breath and then calmly explain what is wrong so that we can work together to resolve this issue.”

Zero in on ways to help resolve potential situations that might create an emotional scene with someone who you know to have a history of difficult behavior. For example, if you know that someone has a particular dislike for certain behavior or a situation and gets emotional about it (e.g. your not being on time), work toward remedies to eliminate the stimulus that might set the person off.

Robert (Bob) W. Lucas is an experienced customer service consultant and has written many books, including  the top selling college textbook, “Customer Service Skills for Success” and “Customer Service: Building Success Skills for the Twenty-First Century.”