Seven Symptoms of Bad Meetings and What You Can Do About Them! 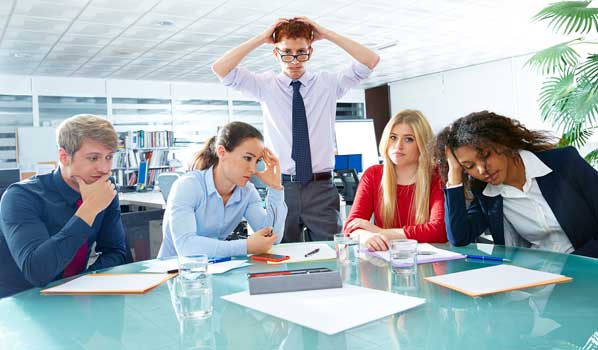 Are your meetings are a waste of time and money? Here are some symptoms of bad meetings and what you can do to fix them.

The door to the meeting room opens and it’s the person who called the meeting, running 10 minutes late because the previous meeting ended late and he had to stop by his office and pick up some notes to remind him of what this meeting was about.

The folks already in the room are discussing last night’s game and wondering how long the meeting is going to last. Only one person remembers getting the notes from the last meeting. And he’s the only one that has a copy of the report they’re supposed to discuss.

Does this sound or feel familiar? You’re not alone. One topic that everyone can agree on is this: meetings are often a waste of time and money. Scary meeting statistics abound. Software company Atlassian’s infographic states that U.S. businesses waste $37 billion a year. Some of that meeting time may have been wasted in your organization. What is strange is why this situation isn’t on the top of anyone’s list to get fixed. If we are wasting billions, why don’t corporations make the effort to fix the problem? Perhaps it boils down to a lack of accountability. But this is something that is entirely within our control. Here are some symptoms of bad meetings and what you can do to fix them.

Your meetings ramble on without a clear purpose. if there’s an agenda, no one follows it

Good meeting practice says that a specific agenda will almost always reduce the time wasted in a meeting. A poll of 471 management leaders noted that 90 percent of those polled attributed the failure of most meetings to a lack of advanced planning and organization. So be sure to send out an agenda before the meeting. Review the agenda at the beginning of the meeting and gain agreement to follow it. It’s also important to empower people to point out when the meeting veers off the agenda. That way everyone can share the responsibility to keep things on track.

People are doing their own thing during the meeting – texting, talking on the phone, responding to email, carrying on unrelated conversations

One way to avoid this is to establish ground rules that everyone agrees on before the meeting begins. These rules include removing temptation by setting limits on texting, email and phone conversations, and requiring people to listen without interrupting. Even if people have agreed in advance to these rules, they may need to be reminded of the ground rules at the beginning of the meeting or during the meeting itself if the rule-breaking is particularly egregious. Such reminding may be done by fellow members or by the meeting leader if there is one.

People show up who are not prepared. they haven’t read the report, document or spreadsheet that the meeting was about or they have not done the research they promised to do

A well-run organization holds staff members accountable for doing their jobs and keeping their promises. But real life often falls short of how we know we should operate. Holding people accountable should be part of any set of ground rules for meetings. When you distribute the agenda in advance, state clearly the preparation that is expected of each member who will participate. Even when you reiterate expectations, there may still be people who don’t think they are the people who are supposed to be prepared. In a separate setting, the meeting leader or their manager needs to state the obvious:

Meetings are places where people report on their work, share information, etc. When members fail to do what they promised, they are being disrespectful of other people’s time – those who came to the meeting in order to participate and learn what progress had been made. Not only are they being rude to co-workers – they are also creating actual economic waste of organizational resources.

There is no closure for decision-making. Decisions are discussed but not decided. there is no agreement to support collective decisions once they are made and people continue to fight them, disavow them or bad-mouth them afterwards

A good business process gets essential activities done with a minimum of waste. A good meeting process requires decisions or a decision that the topic be continued to the next meeting. Create the expectation that a decision will be made during the meeting and drive for consensus. If a decision still can’t be made, the decision may need to be kicked upstairs or assigned to a sub-group. Then, after everyone has their say and decisions are made, the decision needs to be supported by the entire group, even if some disagree. Otherwise the disagreements move underground and undermine the workings of all. There is one special exception: if the decision is illegal, immoral or dangerous. In such cases, dissent may be healthier for the organization in the long run than cooperating in the short run with bad decisions.

Facilitation can improve both the process and the outcome of meetings. According to an article in the Fall 2006 issue of /The Facilitator/, using a skilled meeting facilitator increases the productivity of a project by 25%. Of course the magazine may have a bias, but having someone with training in meeting facilitation has the potential to improve most things. If that’s not an option, help the meeting leader develop some basic meeting facilitation skills that will help even out participation.

Meetings start and end late. some people come late or leave before the end

Timeliness is a matter of integrity. Here we are using the word “integrity” in the sense of being unimpaired or sound. Consider the integrity of the steel beams in a building. If one or more was missing or askew, wouldn’t the building sag or fall down? Similarly, the integrity of your work group or team is undermined when key people are missing during updates or decision-making times; it doesn’t matter why or how. They will inevitably miss important communications, updates, reframing of the issues under discussion, and waste everyone else’s time when they have to be specially brought up to date. Because they missed the original sequence of events, they may also leave the meeting with an erroneous impression of what was discussed or agreed upon. Set the expectation for timeliness in advance and then start and end the meeting on time. If you respect peoples’ schedules, they will be more likely to respect the integrity of the meeting and its objectives.

Your current meeting style might not be healthy for you. If your meetings include donuts, coffee, soft drinks and bagels, they may spike your blood sugar and then cause it to crash. Are your meetings longer than necessary or are they run without breaks? Or perhaps you are holding the wrong type of meeting for the particular time of day. Consider the logistics of the meeting to see if your meetings actually help or hinder the work of the organization.

With more than 30 years of management experience in the maintenance and engineering fields, Joel d. Levitt is a leading trainer of manufacturing, operational and maintenance professionals – having trained more than 15,000 maintenance leaders from 3,000 organizations in 25 countries. Since 1980, Levitt has been the president of Springfield Resources, a management consulting firm servicing clients of all sizes on a wide range of maintenance issues, and is currently the director of international projects at life cycle engineering.