Are you having a hard time dealing with your co-workers? In this article Diane Berenbaum shares some practical tips on how we can make our workplace a little more harmonious. 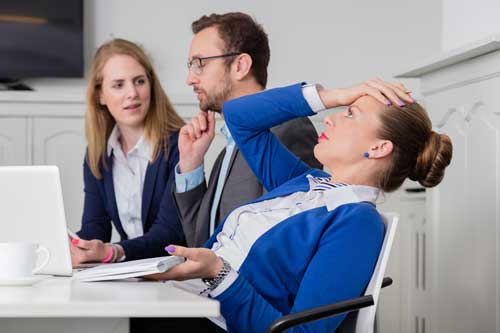 A recent comment from one of my friends caught me off guard, but got me thinking. She said, with a rather accusatory tone, “I bet you actually like the people you work with. Everyone in my company is so difficult!” After chuckling a bit and regaining my composure, I had to admit it: I do like the people in my company—every single one of them. I knew that I was lucky to work in a place where people really care about the work and each other, but this was a great reminder of that incredible fact.

But, isn’t everyone difficult at one time or another? Is it really possible to work in a difficult-free zone? What makes someone difficult anyway?

Ask your associates to describe a difficult person and I’m sure they won’t hesitate to share a few choice examples. I bet they’ll even fall into one of these classifications:

Arrogant types: Profess to know it all and want no help from anyone else, since others are clearly less qualified and worthy.

Whining types: Always see the negative side of things and are constantly complaining about it.

Demanding types: Want things done faster, neater, and more thorough than humanly possible and will issue threats if their demands are not met.

Uncooperative types: Fail to meet commitments and will ignore multiple requests, deadlines, or even threats for their participation.

Inconsistent types: Say one thing, do another and often claim they never committed to doing the first thing in the first place.

Lackadaisical types: Don’t seem to care about anything and don’t take much care with the quality of their work.
Any of these sound familiar? The fact is—anyone who doesn’t behave as we expect can be considered difficult and make our lives difficult in the process.

Let’s face it; difficult people have a way of bringing us down. A friend recently described a conversation he had with an arrogant type and exclaimed, “I just want to smack her!” Yes, this is a common reaction (though, fortunately, it is rarely carried out).

Another associate complained about an uncooperative co-worker who rarely followed through on his commitments and almost always missed deadlines. Her response—total frustration (“He drives me crazy!”) and a lack of trust that he will ever come through when she needs him. Chances are she’ll pad the deadlines she gives him or just go elsewhere the next time she needs help.

With whiners, we may want to tell them to stop the insanity and quit their belly-aching. After a while, we just stop listening to anything they say (even when they are whining about a legitimate concern).

We may feel pushed or threatened when dealing with a demanding person—and decide that leaving the department or the company would be better than facing those unreasonable demands every day.

And, we tend to lose respect for, and ultimately even ignore, those who are inconsistent or lackadaisical.

These responses, while perfectly natural and understandable, don’t tend to yield the best results. Often, we miss important information or get so distracted that we lose sight of the task at hand.

In fact, we might become so annoyed and irritable that it affects our own behavior, so much so that we are perceived as difficult by someone else. And, if we are the difficult person in question, well, you know how others are going to be thinking about and treating us.

While we cannot avoid crossing paths with difficult people – in our jobs, friendships, and yes, sometimes even our families – we can do something about it. It takes work, but it is definitely worth the effort.

Here are six ways to approach dealing with difficult people:

If you think you are dealing with a difficult person, you are setting up the conversation to be difficult. Subconsciously, you may put people in categories and then expect them to behave that same way every time.

For example, your inner-talk about co-worker Jack may go something like this, “Oh that Jack is such a crab; he’s going to complain about anything I suggest. I hate talking with him.”

These thoughts that occur before the conversation even takes place may actually negatively impact the nature and outcome of the conversation. Resist the temptation to label or judge, even if their behavior is irritating or disturbing.

Step Back Before You Respond

Your natural response to a difficult person may be a quick or critical comeback. Stop yourself! That response may, in fact, come back to haunt you and cause the conversation to go spiraling downward.

Trust that the other person does not mean to be difficult. The more you can separate the behavior from the person, the less likely you’ll be to interpret their behavior as a personal attack. Take time to compose yourself and think of your response, instead of reacting immediately.

Stop Wishing They were Different

How many times have you thought, “If only she would be more responsive, positive, or reliable?”

Stop wasting your precious mental energy on a futile effort as you’ve probably realized by now that wishing doesn’t work. Difficult people are not irritating you on purpose—and the best way to see a change in them is to change your own thinking and behavior.

Use a Learning Mindset Approach

Approach each interaction with an open mind—avoid making decisions or predictions before you start. Really listen to what the other person has to say and remain open to their viewpoint. When people feel your support, they will be more willing to work with you.

Practice using this approach with a friend and see if he or she notices a difference. Or, seek help and feedback from someone you trust. A little candid feedback can get you back on track after a slip into auto-pilot mode.

Our first reaction may be to argue and defend our case. When someone makes an unrealistic demand, we might blast out with a snappy retort like, “That can’t be done!” or “That’s not realistic,” which can only lead the conversation spiraling downward (see point two above).

Instead, acknowledge their perspective and offer to collaborate on next steps. For example, “I can see that this is urgent and you want the system fixed by tomorrow morning. It is more complex than it may seem. I would like to take a moment to go over it and explore a timeframe that will ensure that it is fixed properly and completely.” This type of response will not only position you as more of a partner, it will also lead to a better conclusion for both parties.

Don’t be a Difficult Person Yourself!

It is easy to identify someone else being difficult. But, how many times do you look in the mirror and acknowledge that you are the one being difficult, especially when you are pushed, cajoled, or just plain tired?

Know thyself and recognize what triggers your own responses. Take responsibility for your actions without turning to your “dark side” so you don’t become the difficult person that others avoid.
By changing your attitude and approach towards difficult people, you’ll gain a wealth of knowledge, build relationships, and feel a whole lot better. You’ll also find that others respond differently to you because they sense your support and willingness to listen.

And maybe someday, when a friend tells you about his difficult co-workers, you too can smile and say that your workplace is not really very difficult at all.