Identifying the Cast of Culprits that Threaten Productive Meetings

In the Star Wars movie’s famous bar scene you knew, by appearance, what zany character was sitting beside you. 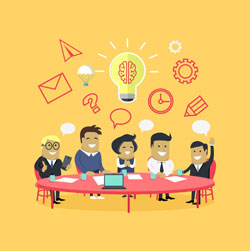 Each character had a distinctive look. Yet in today’s meetings you may have no idea the constellation of characters that you’re meeting with. That’s because their normal outward appearances belie often-troublesome behavior. Use this article as your guide to the crazy cast of characters you’re likely to encounter in your meetings. Whether or not you’re armed with a light saber, you’ll nevertheless be equipped to do battle with these oft-destructive forces who subvert meetings with their bothersome behavior.

The Monopolizer: This person thinks he or she is the only one with wisdom on subjects. The monopolizer believes everyone else is there to hear him or her speak, and so they do, incessantly. They don’t appreciate that meetings offer an opportunity to hear from many. They prattle on and on, arrogantly acting as though their ideas or beliefs are inherently more important than others. Sadly other people shy away from contributing, intimidated by the monopolizer’s stranglehold on the meeting. When facilitators allow this it sends a message their rudeness is sanctioned. The facilitator or even other meeting participants should indicate an interest in hearing from others in the meeting, to remind the monopolizer that others can speak as well as listen.

The Tangent Talker: This person hijacks the topic of the group by taking discussions off on tangents — topics unrelated to the issue at hand. One minute you’re on topic and the next minute you’re in “left field” as your agenda topic has been taken to a tangent. Your meeting chair’s ability to recognize and refocus is essential to a productive meeting. “Let’s remember to confine ourselves to the topic at hand” is a good way to get back on track. Alternately saying, “Let’s try to avoid tangents” also labels such behavior as contrary to the group’s aims. As well, you can “park” extraneous items in a “parking lot” list where they’re noted, if only to be addressed later.

The Devil’s Advocate: Let’s face it, there’s one in every crowd and most meetings too. This person seems to relish taking the opposite tack. Whatever the argument being put forth, this person delights in taking an opposing view. It’s sport for them, an exercise in opposition. The more unpopular the stance the more exciting their challenge. Often they begin by saying “just for the sake of argument…I believe the opposite is true….” While there’s value in looking at issues from multiple points of view and avoiding groupthink, the Devil’s Advocate applies their technique to every issue, every argument and every conversation. Hold on to your Agenda and get comfortable. This could take a while! A good chair can praise this person’s ability to do this while simultaneously indicating its inappropriateness given time parameters or previously agreed issues.

Thy Cynic: The ultimate naysayer, this person has a Masters degree in negativity. Adroit at the phrase “it won’t work” they are skilled at deflating and defeating whatever motion is in motion. “Can’t be done.” “They’ll never buy it.” “We tried it once and it was a failure.” Their motto: just say no. Challenge these people to think like The Devil’s Advocate and suppose for that things could work. Use the common conflict resolution tool of asking them to embrace the other side’s view as if it were their own, and argue that side’s position.

The Fence Sitter: Known for their paralysis by analysis, these characters are unable to make decisions. Despite being in a deliberative body, they are conflicted by multiple arguments, and can’t “pull the trigger” when it’s time to make a decision in a meeting. They provide fodder for the Devil’s Advocate, the Cynic and other characters with their ambivalence. Whether they are afraid of being wrong, or of disagreeing with someone else, or just going on record, they are a meeting monster for their inability to move the action forward. Try to cajole them to action. Remind them they have a vote and were invited to use it. Ask them their opinions on matters to draw them out and get them on record.

The Brown Noser: There’s likely one in every meeting. The person who is so obsequious, bending over backwards to ingratiate himself or herself to the boss, the meeting leader or other power broker. They’re so busy currying favor with others they subvert whatever true feelings they have about issues to “kiss butt.” They are seen to be in the pocket of the person they’re cow-towing to. Ultimately they are seen for who they are and become predictable. Try to elicit their ideas and preferences before asking others as a way of drawing them out.

The Pandora’s Box Opener: These meeting monsters just have to tackle issues that are emotional, touchy or are “hot buttons” for others in the meeting. In every meeting there are topics sure to strike a nerve, to provoke an emotional reaction or enter the group into a quagmire. These people lead the entire meeting into areas that provoke frustration, animosities and often resentment too. Once this box is opened, it’s hard to get its issues back in the box. Discussions of salaries, promotions or personal styles often stir up issues that hijack meetings. Even worse, some culprits reopen issues from earlier in the meeting that have already been resolved. The best cure: a firm “let’s not go there’ from the meeting’s facilitator. Other phrases like “let’s cross that bridge when we get there” or “that’s a hornets nest we don’t need to disturb” labels certain subjects out of bounds.

The Attacker: As children these people were bullies. Some haven’t grown up! The attacker deftly mixes negativity with personal attacks, challenging others’ ideas with vigor. Without regard to hurting others’ feelings, the attacker uses a confrontational style to object to others’ ideas and go against the flow. Sadly, sometimes they don’t even realize they’re attacking. A good facilitator can refocus them to be positive, to remove the sting from their words and avoid an adversarial approach. All meeting participants are entitled to stop the meeting when attacked personally. Ad hominem attacks are attacks against one’s person. People can criticize your actions or beliefs, but you don’t have to tolerate attacks against who you are as a person.

The Joker: Don’t let their good nature fool you, Jokers can be meeting monsters. Their constant joking has the effect of diminishing others’ serious ideas or suggestions. Their infusion of humor can belittle others’ motions and makes it difficult for some to be taken seriously. There is a time and place for joking. While we all like a good laugh, constant joking disrupts a meeting and distracts attention from where it should be. A meeting chair can designate several minutes at the start or middle of a meeting specifically for humor. When it crops up elsewhere and is deemed disruptive, the chair can remind people the time for humor is passed or forthcoming, so as to control it.

The Robots: Yep, these meeting monsters are actually cell phones, pagers, personal digital assistants (PDA’s) and laptops. Each distracts their owner and others too as they intrude on participants’ attention spans during meetings. It’s gotten so bad now cell phones contain cameras within them…just what meetings need. A good meeting chair will create ground rules for meetings, including turning off these gadgets at their outset. It’s hard to compete with human distractions, let alone electronic ones as well.

As you can see, meetings are full of characters. You should study the behavior in meetings, including your own, to better understand your style of interaction. The character of your meetings will surely be affected by the characters in your meeting. May the force be with you.