Should your Company be Stricter on Sickness? 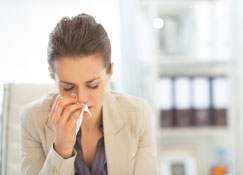 Every business has to face up to the fact its employees will get sick. You employ human beings, not robots, and they are susceptible to getting ill. But too much sickness can be a real drain on resources.

One study reckoned that the average time spent off sick was 6.5 days per employee, costing a massive £16 billion.

Some companies are relaxed about sickness. They understand that people get ill and don’t want to hassle their employees about this so leave them alone to return to work when they’re better.

Many, however, have a policy where an employee is ‘allowed’ to have a certain number of ‘sick days’ before questions are asked. Some will, say, tolerate two or three every six months, for example.

But that poses a risk. If an employee knows that they will face no recriminations if they take a day off sick, will it encourage them to stay off when they’re feeling 50/50? For some people, it will make a difference. In a quota system, some employees have even been known to tactically ‘use up’ their ‘allowance’ of sick days and treat them as bonus holidays when they fancy a long weekend or can’t be bothered to throw back their duvet.

Should you get tough to stop being taken for a ride?

So, how about ending the quotas? Would ‘no more Mr Nice Guy’ stop people taking liberties? While you clearly don’t want to break the law you could, in theory, take a much more hands-on approach – quizzing employees at length, issuing forms that must be filled in and launching a formal process if unexplained absences tip over a certain point, with disciplinary action as the ultimate action.

But there’s two things to consider here. Firstly, it’s tough to run a happy workplace if you go too far in this direction. Employees won’t be impressed by a hardline approach and, through word of mouth, your reputation could suffer.

Secondly, it doesn’t pay to force people who are genuinely sick into work. Their performance will be far from its peak and all they’re likely to achieve is infecting their colleagues and creating more sickness to contend with.

Rewards… and the risk of rewards

You could switch the emphasis from the people who are sick to the people who aren’t. Many employers offer an incentive to their staff if they stay sick-free for a year, such as an extra day off or a cash bonus. This can be a nice way of giving something back but it’s worth being careful. If the reward is too great you could end up with the problems we’ve outlined above – with people dragging themselves into work and spreading their germs just to make sure they get their bonus. You also don’t want to punish people who have genuinely been ill.

The best policies need to strike the right balance. The trick is in managing your workforce properly. Get your HR department to focus on the people and not the paperwork by using software such as that from CIPHR to free them from the red tape. Speak to staff, help them with any medical conditions they have and talk to them after sickness absence in case there’s an underlying issue to address. Don’t interrogate them, just show that you care and want to take your duty of care seriously.

Also, don’t underestimate the importance of the atmosphere in your workplace. If your office is a happy place to work, people won’t want to abuse your sickness policy to pull a fast one. A strong team ethic and a positive atmosphere are the best sickness policies, not a strict sickness dictatorship.

Debbie Fletcher is an enthusiastic, experienced writer who has written for a range of different magazines and news publications over the years. Graduating from City University London specialising in English Literature, Debbie’s passion for writing has since grown. She loves anything and everything technology, and exploring different cultures across the world. She’s currently looking towards starting her Masters in Comparative Literature in the next few years