The Importance of Decision Making Skills

The ability to make a decision and stick to it is the cornerstone of good leadership skills. 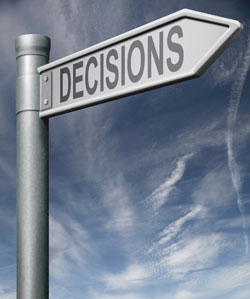 Decision making is an on-going process in every business; large or small.

Having critical thinking skills allows one to ascertain the problem and come up with a solution that is beneficial to the company and its employees.

Managers have to make decisions every day, and the process used in making a decision is important to their bottom line.

The inability to define one’s position in any given situation can ultimately affect not only the company, but the manager as well.

Looked upon as an indecisive leader, a manager’s failure to make a decision can cause chaos among employees, and interrupt the overall production and efficiency of the staff.

Conversely, a manager who not only has common sense, but has the ability to act quickly in any given situation is viewed more favorably among the employees.

Decision making does not allow for second guessing. A manager must make the determination based on the facts presented, and proceed with a quick and professional judgment.

So too, a manager cannot make a decision and then subsequently change that decision because of how he or she may be perceived. A good manager has to keep somewhat of a distance from his or her employees so that the decision making process is not skewed or looked upon as favoritism.

Moreover, a manager has to maintain fairness when making decisions. It has to be unbiased and appropriate to the situation. Arbitrarily making decisions based on hearsay or unsolicited information is unprofessional, and shows a lack of trust and confidence – not only in themselves but in their work force as well.

While one can acquire good leadership skills, it takes an innate sense within one’s own character to be able to make decisions unencumbered by any one person or situation.

Employees look to managers to make competent decisions which have a positive effect on the company. Without these decision making skills, one’s leadership can be called into question.