May was a great month for entrepreneur and photographer Kym Illman. He was trackside as Perth-born Daniel Ricciardo dominated the Monaco Grand Prix, capturing some super sharp images of the drivers and the celebrities in the huge and colourful crowd. 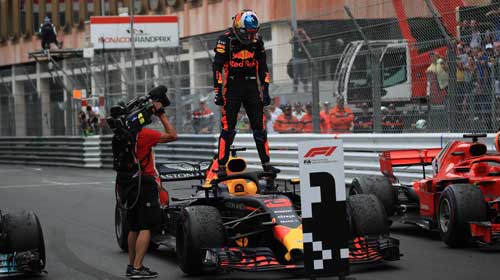 As Illman, and anyone following the F1 calendar knows only too well, Monaco at GP time epitomises everything that’s great about Formula 1 racing – speed, glamour, passion, noise and more than a hint of danger as cars drive perilously close to barriers lining the narrow streets.

Even after suffering a loss of power in the early stages of the race, affable West Australian Ricciardo, whose parents are friends with the Illmans, managed to hold onto his lead ahead of Sebastian Vettel despite being 20km/h slower on the straights.

As someone who looks for parallels between the cut and thrust of Formula One – where a split second decision can mean success or failure – and real life, Ricciardo’s grit in overcoming a serious race setback and coming through for a win wasn’t lost on Illman.

The former disc jockey who has grown his Messages On Hold audio marketing company from a one-man operation in his spare bedroom to a global marketing success has circumnavigated his own share of hair-raising bends and turns and understands how small the margin separating winners from losers can be.

During this particular stop on the busy F1 calendar it was another incident, one almost comedic as it unravelled in the day following the race, that was to bring home Illman’s biggest learning of that weekend. Bizarrely, as he explains, it was all to do with a birthday cake.

“On the Saturday of the Monaco race it was my birthday and Daniel Bois from Grand Prix Events dropped off a cake to boat we’re staying on,” Illman recounts. (The boat, Quid Pro Quo, holds one of the prime positions in Monte Carlo’s Hercule Harbour during the four-day grand prix event.) 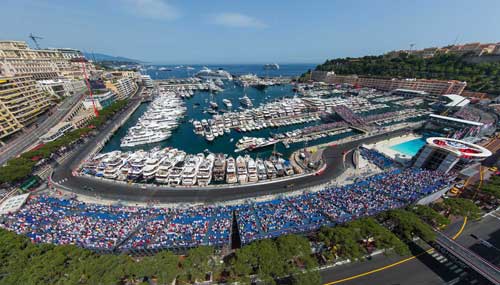 “I asked one of the kitchen staff if they’d put it in the fridge so that we could all enjoy a piece the next day. The time duly came around and as we were sitting up on the deck, I asked one of hostesses to bring it out. She seemed confused so I asked the captain to help arrange for it to be served.”

Illman says it was some time later that the captain returned to say unequivocally the cake had vanished, ‘it is lost; these things happen’ he explained majestically.

“Then 10 minutes later,” Illman grimaces, “They were back. They’d found the cake, well rather part of the cake. Some of it was missing they said, but what they’d found would be served immediately.”

There, one would suppose, the tale might end, in a glorious late afternoon of birthday sponge indulgence. But no. 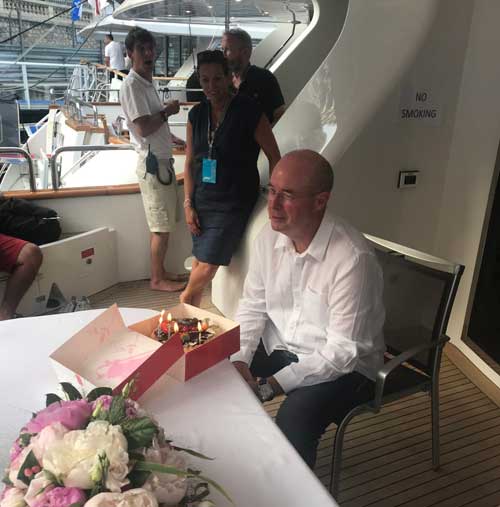 The only captured shot of the cake!

“More time followed and the ship’s chef arrived to tell us that unfortunately there was no cake,” an exasperated Illman says. “When we asked what had happened, he said he couldn’t be 100 percent sure (in actual fact he couldn’t be 10 percent sure) but he felt there probably wasn’t enough room in the ship’s fridges to store it and it was thrown out.

“A little while later we were surprised to see the captain return again and ask if we enjoyed the cake. ‘What?!’ we replied. ‘Didn’t you like it?’ he asked again and one of our very funny British friends chimed in with ‘we never had it!’

“It was at this point we suggested he go and get the chef so that between the six of us, we could get to the bottom of where the disappearing cake might be.

“Caption Clueless and Chef No Idea presented a few minutes later to explain themselves and their final version of the fate of the cake? ‘We can’t serve food that is more than 24 hours old as it is a health issue,’ Chef proclaimed. This, despite the fact that we were having this bizarre discussion less than 24 hours after the cake was brought on board the vessel!”

For Illman, who built an entire second business – Canity.com – following his continued frustration at the lack of customer service he experienced both at home and while travelling, it was further evidence the message the customer is always king still hasn’t hit home in many places of the world.

“If any business ever needed Canity.com staff training, it was this one,” he says of the hapless boat crew. “Why is it we’re still shocked when we actually do receive excellent customer service? There’s been so much research to prove the value of looking after the people doing business with you.

The Cost of Losing Customers

“Research shows it costs up to 10 times as much to attract a new customer as it does to keep an existing one,” he says.

“A 2017 study showed that 62 million families in the US report at least one service problem a year, which left 56 per cent of them in a rage or extremely upset. According to the same study only 25 per cent of them were able to resolve their problem in one go with the company.

“In fact 19 per cent of them had to contact the company more than seven times! And after all of this, 80 per cent of customers remained unhappy, even after the matter was sorted,” Illman says.

In Australia, the cost of below par customer service is estimated at around $40 billion per year, or $720 for every negative customer experience.

“Yet so many companies continue to ignore the message,” Illman says. “Getting the customer experience wrong is an expensive business and once you’ve lost a customer, as the statistics show, it’s very hard to win them back.”

Which is where his online training platform, Canity.com, comes in. Designed to tackle the problem at the actual workplace through a series of modules made up of short, entertaining and easy-to-digest animated video lessons they are delivered directly to a participant’s email inbox.

Usually running less than a minute the videos cover all the fundamentals of customer interaction – ranging from presentation skills to phone and social media skills, to dealing with disappointed clients and everything in between – to help service businesses manage their all-important interactions.

“There’s also a Master Series, with modules for business owners and managers looking to change the way they work.  At the completion of each module, the viewer completes an interactive online quiz and can download further training content,” Illman says.

“I have absolute confidence that this product is a winner and we are seeing that in interest from around the globe.

“It all happens online and just when it’s convenient for the staff member so we’re not impacting on productivity. The back end of the product allows the boss to see who’s done the training, how they’ve scored and what areas they might be falling down in. For managers, Canity does all the work for them.”

For the hapless boat crew some timely instruction on, perhaps, ‘Acting on a problem’, ‘Handling complaints’ or even ‘Letting angry customers vent’ may have meant the difference between hours of frustration for an amused and ultimately annoyed Illman and his friends, and for a happier birthday!

“I’ve always had that personality of wanting to please someone. In business I think you have to think ‘what’s the extra, what can I give people that will really get their attention and make them come back? That surely is what customer service is all about,” he says.

As well as Canity, Kym Illman has also launched The Groove Gallery, tourism website Lancelin.com.au, marketing endeavours MessageVision and VideoUpdateMe and is renowned for his spectacular ambush marketing techniques across Australia. His entertaining and informative Formula 1 Blog can be found at https://www.kymillman.com/f1-diaries/