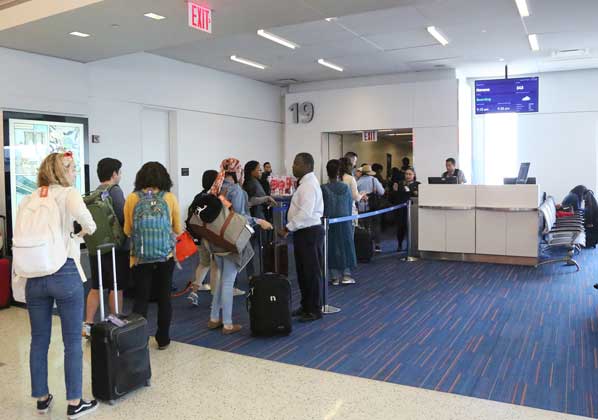 After a year of customer service crises and rising ticket prices, customer satisfaction with airlines drops 2.7 percent year over year to a score of 73 on a scale of 0 to 100, according to the American Customer Satisfaction Index (ACSI®) 2018 Travel Report.

Guest satisfaction with hotels remains steady at an ACSI score of 76, while internet travel services fall 1.3 percent to 78.

All but four of the largest airlines saw passenger satisfaction decline in the past year. Southwest holds steady at an ACSI score of 80 for the third straight year, likely a reflection of low fares and focus on customer service. It was enough for the airline to reclaim the lead from JetBlue, which falls 4 percent to a score of 79. Alaska Airlines rises 1 percent to tie for second place. Alaska’s merger with Virgin America, which has a legacy of good service, plus lower fares, may have contributed to the rise.

Allegiant had the biggest jump of the year, rising 4 percent to a score of 74. Despite the satisfaction gain and a strong record of profitability, Allegiant may be heading straight into turbulence following recent high-profile news reporting on mechanical issues and safety concerns that sent its stock tumbling.

American and Delta join Allegiant in the middle of the pack, both dropping 3 percent. United falls 4 percent to a score of 67, and Frontier (down 2 percent) and Spirit (up 2 percent) tie for last place with a score of 62.

“The 18-point gap between first place and last place among airlines is fairly typical,” said David VanAmburg, Managing Director at ACSI. “Customer satisfaction is going to be lower for the ultra-low-cost carriers, which are focused more on price than quality, and the scores reflect that. The same holds true among hotels. As costs rise and seats shrink, a focus on customer service and loyalty will set some airlines apart.”

With the exception of the airline check-in process, which remains at 82, every aspect of flying deteriorated in 2018 compared with the prior year. This includes making reservations (81), flight crew courtesy (80), and baggage handling (79). According to passengers, leg room is not improving, and while seat comfort was already the low point of travel, it worsened more than any other element this year, dropping 3 percent to 69.

With increased competition from alternatives like Airbnb and boutique hotel brands, larger hotel chains are under pressure to provide a more customized experience and even better customer service. Hilton and Marriott are among the chains that are succeeding.

Hilton steps up 1 percent to hold first place with an ACSI score of 82, while Marriott takes second with a 1 percent gain to 81. Starwood, owned by Marriott, ranks third, unchanged at 79. Hyatt sheds 1 percent to tie Starwood at 79, followed by Best Western (up 1 percent) and InterContinental (down 1 percent) at 77. La Quinta edges up 1 percent to match the industry average at 76.

Choice and Wyndham each slip 1 percent to 73 and 70, respectively. G6 Hospitality’s Motel 6 remains at the bottom of the category, unmoved at 65.

Among hotel brands, AC Hotels by Marriott rises to the top with an ACSI score of 84. Hilton takes the next spot with Garden Inn at 83, followed by its Embassy Suites, Hampton, and Hilton Hotels & Resorts at 82. Luxury brand JW Marriott (82) joins these properties as well.

Expedia Group and its brands remain dominant among travel websites for booking flights, hotels, and car rentals, despite a downturn for its namesake website. Expedia’s Orbitz leaps ahead 4 percent to top the category at 81, while Travelocity, another Expedia subsidiary, gains 4 percent to 80. The 2017 breach of Orbitz’s legacy platform was not revealed until after data collection and is not reflected in the results.

The Expedia website itself shows signs of strain, dropping 3 percent to 78, no better than smaller travel website sites, which also fall 3 percent to an aggregate score of 78. Competitor Priceline also scores 78, but rebounds 1 percent after a sharp decline a year ago.