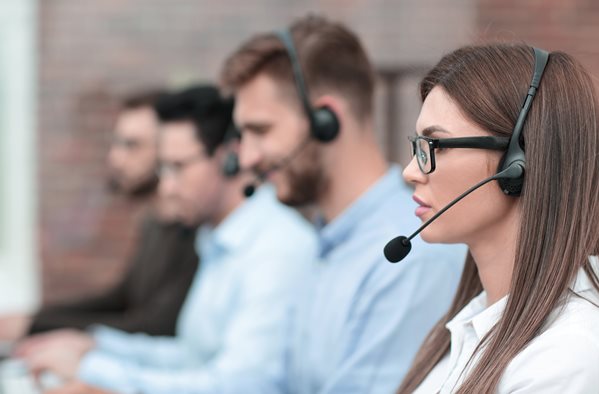 Working in a call center can be tough, especially when you are dealing with difficult customers. Eric Harne, 911 Communications Consultant and writer, introduces the Angry Customer Protocol (ACP) for better customer interactions and problem resolution.

To paraphrase a saying from gladiatorial combat in ancient Rome: “For those who are about to be verbally abused, I salute you!” If you have worked in a call center for any length of time, you have been the recipient of a lexical tongue lashing. I always found it amazing how people who may be mild mannered in other aspects of their lives, suddenly turn into fire breathing, overbearing, threatening miscreants of mayhem when communicating by telephone.

Perhaps it is the disembodied/anonymous nature of those interactions that fuels their passions, but whatever the reason, being on the receiving end of such vitriol can be uncomfortable…if you allow it. And therein lies the crux of the problem; a problem for which I offer a solution – the Angry Customer Protocol (ACP).

I have spent the last 25 years answering thousands of phone calls in a 911 center. They ranged from the hilarious to the horrific. And during that period, I have encountered many unhappy, hysterical, raging, angry, threatening people. Initially, I did not manage these calls well. I took offense and felt insulted. Worst of all, I internalized those feelings and allowed them to affect my attitude towards work.

Callers who resort to insults can be particularly troublesome when you are dealing with life-or-death situations. It was a bad combination that eventually required me to reassess my reactions to challenging callers and change my approach. Over time, after a great deal of research and trial and error I developed the ACP, and it is five simple rules.

Picture the ACP as a pyramid where each rule builds up the other, providing a solid base for better customer interaction and, problem resolution. 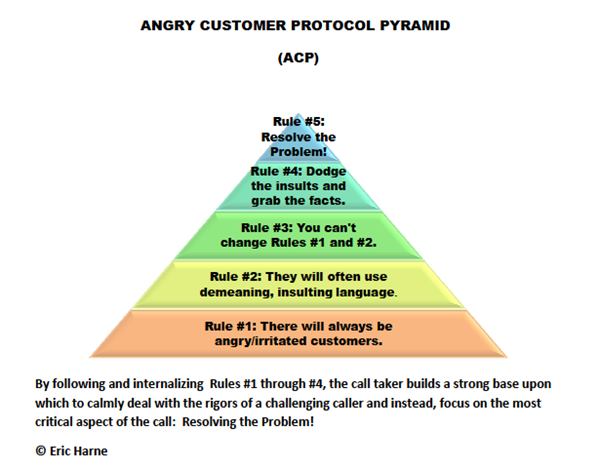 Rule #1:  There will always be angry customers. It is inevitable.

If you wake up every day praying that you will not have to deal with angry, unreasonable people, you will have a long, unhappy career. Providing a service invites customer complaints. Some may be justified, some may not. But if you build it, the complaints will come.

Rule #2:  Customers will often use language that insults and demeans.

Eventually, it is going to happen. A customer will use salty, vulgar, offensive language. Communications can deteriorate quickly if someone is not the adult in the exchange. Hopefully, that is you. The problem with many call takers when confronted with foul language is that they feel disrespected. Answering a phone does not mean you automatically deserve respect. You do not. Never expect it. This rule is a tough one for some people, but the fact of the matter is that you must anticipate someone’s dreadful day while not having it affect yours.

Seriously, you cannot. Accept it. Embrace it. The sooner you do the better off you will be.

Rule #4:  Dodge the insults and grab the facts.

It is mindboggling listening to call takers going toe-to-toe with an angry caller, exchanging insults, yelling, and believing that they have successfully transcended the situation by acting just like them. Unfortunately, the results of such an encounter yields and even angrier customer, a stressed-out call taker and a fractured resolution to the problem. The worst way to deal with crap slingers is to sling it right back at them. And quite frankly, you can look incredibly foolish doing so – especially if your calls are recorded. There is nothing quite like sitting in a room with a manager and a quality assurance rep while they listen to you imitate the unruly behavior of the customer. Want to reduce your stress dramatically? Focus on the message, not the delivery system. No matter how much someone rants and raves, there is usually a problem in search of a solution. Learn to separate the two.

Rule #5:  Work the facts and resolve the problem.

If you have followed the first four rules of the ACP, you are left with customer’s actual problem and a calmer disposition. When you are objective, resolving the customer’s issues becomes a much easier task. In other words, you are responding instead of reacting. Your mind is not distracted by anger and irritation towards the persons you are tasked with assisting. They want solutions. They want to know that you hear them and are taking constructive steps, so they no longer feel powerless – which is often at the root of their bad behavior. You can lighten their burden without carrying it yourself.

The ACP is an effective tool for use in challenging customer interactions. Its rules serve as a roadmap for controlling your emotions, which by extension controls the customer. Use it to your advantage.

Eric Harne is a 911 Communications Consultant and writer from Harrisburg, PA.  He has a B.S. degree in Law Enforcement and Corrections from Towson University and is a 25- year veteran of a 911 center in central Pennsylvania. He can be reached at egharne@gmail.com