Step up and Be a Customer Service Leader 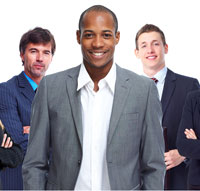 I’ve seen pilots engage with passengers before, but Gerald Higginbotham takes it to a whole new level.

I encountered Gerald as I was boarding a very early morning flight to Dallas. He was one of the pilots, and he was greeting every single person as they stepped onto the plane. It was more than a simple greeting, he was building a rapport and having real exchanges with the passengers.

“Where are you going?” he would ask. If they answered anywhere other than Dallas, he would say, “Well we’re flying to Dallas, and as long as that is on your way, you’re on the right plane.” Then he would laugh.

He was very outgoing and engaging, and most of the passengers were smiling as they walked away from him to find their seats. I sat and watched and admired this amazing display of enthusiastic interaction.

Finally, everyone was seated, and then—bad news. The flight would be delayed at least a half hour due to the weather. A few people fidgeted in their seats, but there was not a big reaction. Then, a few minutes later, it was announced that the delay would be longer, at least an hour. Normally, that kind of announcement makes passengers start to get restless. They want to leave the plane, see a gate agent, call reservations or take some other action to avoid missing connections or being late to their destination. I’m one of those passengers.

However, something was different that day. Many of the passengers—even me!—were in a different kind of mood, and it was all because of one person, Gerald Higginbotham. His mood was contagious. And that is what brings me to the point:

Just like the old saying, “Enthusiasm is contagious”, I would extend that to customer service as well. And Gerald was the perfect example.

Before we heard the news about the flight delay, he had already put us in a better mood, and that made accepting the bad news easier. Sometimes, passengers seem to think that bad weather is the airlines’ fault, but nobody seemed to have that opinion on that day. It just seemed that the outward friendliness of our pilot made everyone a little happier, more accepting and more tolerant.

And, guess what else? The other pilot and the flight attendants seemed to be happier too, and as a result, they delivered an even higher level of customer service.

The lesson is this: Just one friendly, outgoing, customer-focused employee can raise the bar for everyone. Gerald took the lead and set an example for the other employees, and they followed along. He ensured that on that plane, on that day, there was a customer-focused culture—and many happy customers.

Originally published as ” When It Comes to Customer Service, Be a Leader”. Reprinted with permission.