I met for lunch with Dr Ken Blanchard, best-selling author of “The One Minute Manager” and “Raving Fans”. It was a great opportunity to gain an insight into the mind of one of the world’s leading management thinkers. 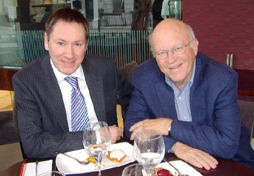 As we took our seats it wasn’t long before Ken was telling me about his own experiences as a customer:

“I had a problem checking in my luggage at the airport. It wasn’t clear how many bags you were allowed to take into the cabin and instead of helping, the person at the check-in desk just made things more difficult. He sure was wearing tight underwear that day!”

I immediately realized that as well as being a leading academic and successful businessman; Ken Blanchard was a customer just like you and me – and lunch was going to be fun.

I asked Ken why so many companies get customer service wrong. He replied: “Too many companies act like Ducks instead of Eagles. Ducks follow unnecessary rules and procedures and go ‘Quack! Quack! Quack!’ all the time while Eagles take the initiative, soar above the crowd and respond to customer’s problems. Companies that create Duck ponds have a leadership problem.”

I was curious to know if Ken thought there were any airlines with the right kind of leadership and customer focus. He was keen to answer: “I think of Southwest Airlines. They go out of their way to put the customer first. They joke with you onboard and make the whole flying experience fun.” Ken was so enthusiastic about Southwest it struck me once again the power of customer advocacy. I was already looking forward to flying with them.

But back to those Ducks we left quacking around earlier. I asked Ken if there was anything that could be done to turn Ducks into Eagles: “So often you see self-serving leadership, and that’s the kind of attitude that lies at the root of poor customer service. The right kind of leadership is servant leadership, leadership that puts its people first and empowers them to behave like Eagles,” He replied.

Servant leadership? Sounds kind of profound. I ask Ken to explain some more: “Self-serving leaders put themselves before others. They think everything is about them. Leadership is really about love – and servant leaders love their customers and their employees.”

He continued: “Most companies have a pyramid hierarchy with management at the top and frontline customer service people at the bottom. What needs to happen is for the pyramid to be flipped over, so that frontline people – the people who are closest to the customers – are at the top. Leaders become servant leaders and are responsive to employee’s needs and allow them to accomplish the company’s goals and create Raving Fans.”

I asked Ken if there were any corporations he felt were living these values: “Let’s take Disney. Walt Disney started his theme parks with a clear purpose. He said they were going to be in the happiness business. Cast members, as Disney employees are called, have the role of keeping the smiles on the faces of customers. This clear purpose comes from the leaders at Disney and drives everything they do.”

He went on: “Another company that is a successful, customer-focused organization is Mary Kay. Mary Kay’s vision is simple; hire nice people and let them know they can be as nice as they want to be.” This sounded so simple but struck me as almost revolutionary. In other words, get rid of the scripts; let people use their brains and above all – encourage them to be nice!

Next I wanted to bring up something that puzzled me. While reading many of Ken’s publications over the years I ‘d discovered only one of his books had his photo on it. I asked him if this was a conscious decision, or maybe an oversight? He smiled, then answered: “When I started out in business I thought about three outcomes; Fame, Fortune and Satisfaction. First, fame: I didn’t care for that; I’d rather be able to walk around without being recognized – and I do most of the time. Second, fortune: not an end in itself, but good for creating more opportunities. I chose the third: satisfaction.”

Ken emphasised the importance of values: “At the Ken Blanchard Companies our values are; Make a difference, Make a profit and Have fun. In fact making a profit is actually a bi-product. I also believe tithing is a good thing. There is a great joy in giving.”

And these are not just words; Ken’s company runs a program “Blanchard for Others” an employee-supported, non-profit charitable program that donates to good causes and encourages Blanchard employees to get involved in the communities where they live and work.

And what of the future? I asked. “I look to the future with the help of my wife (and founding partner) Marjorie, who heads up our Office of the Future. Margie’s currently looking at new and counter trends in learning systems. It’s important to have someone different to those managing the present in your organization, creating the future.”

As our lunch drew to an end I had one final question for Ken: “I understand you deliver a voicemail each morning to every one of your three hundred employees. If I asked you to send a voicemail to the readers of this article, what would it say?” Ken thought for a moment, then left me with this message: “You become an adult when you learn to serve others not yourself. Look at the job you do and think, who can I serve today?”

As we left the table and prepared to go our separate ways, I concluded that Dr Ken Blanchard is more than a best-selling author and business guru – he’s a highly spiritual man who believes in the greater good. Perhaps that’s why his job title at the Ken Blanchard Companies is “Chief Spiritual Officer”.

About The Ken Blanchard Companies