How to Become a Customer Service Hero!

Can you step up to the mark and become your customer’s hero? 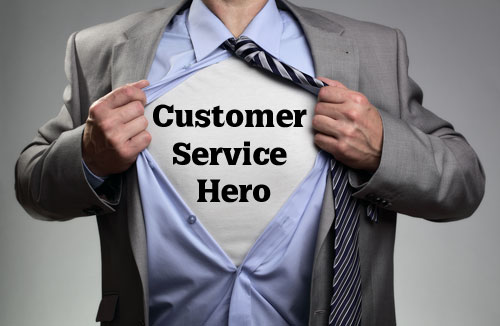 My 20-year-old daughter recently dropped her phone and shattered the screen. It happened as we were leaving a restaurant where we had lunch before taking her to the airport. She was catching a flight to the UK to spend a semester studying abroad.

We still had a little time, so we went to the phone store, hoping to quickly replace the phone. We explained the situation to the manager, who insisted that a technician would have to inspect the phone before it could be replaced.

The technician had a full schedule and wouldn’t be able to examine the phone until later that day. Unfortunately, we didn’t have time to wait. We asked if the manager would simply look at the phone as the damage to the glass was apparent.

However, the manager insisted that the technician had to check for additional damage to the phone before it could be replaced. She suggested that we try at another of their stores in the area. We agreed since the phone had to be replaced, and the manager did call to make an appointment for us. By this point, our time was running low (and frustration level was high).

As we traveled to the second store, I called the company’s customer service line and explained the problem. The representative was surprised by the manager’s actions, and he called ahead to the store where we were going and told them to expect us. We were instructed to find the manager immediately and she would take care of my daughter. And sure enough, she did. In less than 10 minutes we were back on the road with a new phone.

Even though a second store came through for us, how much better would our customer service experience have been if the manager of the first store had stepped up? She could have been our hero that day, but she blew it.

One bad customer service experience can erode even a faithful customer’s confidence in a company. The first manager dug in her heels and lost an opportunity. If she had even taken the time to look up our account, she would have found out that we had purchased multiple phones from the company over the years and that our monthly bill showed that she was dealing with a higher-level, loyal customer. Had she furthermore considered the value of our account by multiplying the monthly cost by the 24-month contract, she might have realized that we are worth thousands of dollars to the company. But instead, she refused to help, despite the fact that we had an emergency.

We should always be on the lookout for opportunities to be a customer service hero. Sometimes clients will call me, panicking because a speaker backed out at the last minute. If I am available to fill in I do it, or if not, I try to suggest someone else. The last time it happened, the client’s budget for the event was much lower than my usual fee, but the client needed help and I was available. That day, I was the hero.

Want to find more opportunities to shine? Don’t just look for problems or wait for emergencies – make it a point to give customers a little more of your time. Customers who receive extra will go away feeling that you are a hero.