Customers on Fire: How Good Is My Suit?

The only way to extinguish a fire that is burning brightly is to move towards it rather than away from it. 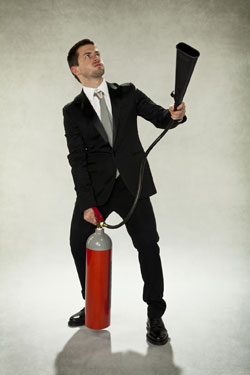 Running towards a fire is without a doubt one of the most difficult things to learn to do. Fire-fighters must train to overcome the natural instinct to move away rather than towards a fire.

Running towards a fire is unnatural, especially when it is an especially big and bright one. In my seminars, I stress that the only way to extinguish a fire that is burning brightly is to move towards it rather than away from it.

I had the great fortune of learning that lesson early in my career. Let me illustrate what I mean.

Our service drive area had a large window in which we could look out and down and see who was pulling in. We had just finished repairing Ms. Ferocious’s vehicle. She had picked it up just a few minutes before, and imagine my surprise when she raced up the service drive to a full tire screeching stop. She had rocketed up the service drive, flames shooting, that the other advisers and dealership personnel scattered to the winds leaving me alone to put out the fire.

I had received the “run to the fire” training and remembered how important it was to run out and meet it head on. I grabbed my asbestos suit and flame retardant head gear (training) and ran out into the service drive and the ominous ball of flame.

I met Ms. Ferocious at the opening of her driver’s door to screams of “You guys just fixed my antenna and it does not work!” “I had to come back here and it is taking time out of my day!”

Luckily, I had two things going for me. I speak “customer talk” and by that time I had the fire resistant gear on. (I had engaged my brain and remembered my training)

Translation: “You incompetent boobs! If you can’t even fix this simple problem, why should I even trust you with my car in the future?” “And to top it off, I am losing time out of my day, and now I might be late for my important meetings and other stuff and it is going to cost me money!”

Me: “I can see that something is not quite right here. May I take a very quick look at the vehicle and see if it is something simple?”

Ferocious: “I certainly hope so!”

Me: “Here we are right here” as I then press a button on the dash. The antenna goes up, and the sound I hear is flames being extinguished as though by a giant fire extinguisher.

Ferocious: “I had no idea there is a button on the dash” she said. “I’ve owned this vehicle since new….”

As I was finishing up with the fire cleanup (telling the customer I love them, sorry for the inconvenience, inviting them to come back and see me next time) the other personnel returned to their stations and looked me over for scorch marks.

When it became apparent that I had none, they asked me how I did it. I explained that I used very simple assertive communications skills. (I had put on the right suit and used it.)

1. I acknowledged that something was wrong. “I can see something is not quite right here.”

2. I asked for permission to investigate. “May I take a quick look at the vehicle and see if it is something simple?”

3. I then told the customer how much I loved her as a customer and invited her back and apologized for her inconvenience to which she replied that from then on she would only ask for me.

She became one of my best customers that day and brought me gifts at Christmas and holidays. The other dealership personnel continued to flinch when she came in. That was o.k. by me, as she was a very loyal customer. It’s not to say there were not any further opportunities for excellence. She continued to be somewhat ferocious on further visits, but I never had to put on the full fire protective suit. I had learned that running to the fire paid off for me. And if you follow that simple rule it will for you too.