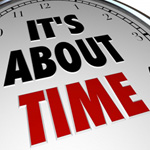 Do you ever stop to think about how much time people spend on the phone making calls to complain about bad customer service?

A recent article in The Street pointed out that, on average, adults in the U.S. spend about 364 minutes every year placing calls to report complaints, waiting and hoping to talk to someone who will make things right.

In other words, if you are one of the “average people,” you spend about six and a half hours each year on the phone. In six years’ time you lose almost an entire work week, and over 25 years, an entire month of your life will be dedicated to complaining about bad customer service. Much of that time will likely be spent “on hold”.

The author of the article, Brian O’Connell, used data from Populus Research and Kana Software, which refer to the” complaint wait” as the “hidden price of doing business.” Here are some other interesting facts that the study produced:

More than 70 percent of consumers in the U.S. have taken the time to voice a customer service complaint in the last three years. The average time spent to lodge a complaint was one hour and four minutes—for just one complaint!

In most cases, actually getting problem resolution didn’t just happen in one attempt. Sixty-nine percent of consumers had to repeat their complaint, and on average, it took three attempts to get a problem resolved.

Thirty-nine percent of complaints were made by phone call, and 33 percent via e-mail.

Despite its growing popularity, social media—such as Facebook, Twitter and Yelp—was the channel for only 7 percent of the complaints.

Personally, I expected the number for social media complaints to be higher. Other surveys show that more consumers are turning to social media to air customer service grievances. Even at 7 percent, however, complaints via social media have to be taken very seriously as they are visible not only to the company receiving the complaint, but also to the customer’s friends and followers, and in some cases (such as Yelp) to the public. Even if the overall percentage is low, customer service complaints via social media are definitely on the rise as consumers realize its effectiveness and companies’ desire to maintain a positive image.

This article should be a wake-up call to all types of businesses, especially those that market to the general consumer. It’s surprising to learn just how much time is spent on the phone dealing with customer service issues. Time is a precious commodity, and if you “steal” it from a customer, you are showing a tremendous amount of disrespect.

Customers have limited time and can’t afford to waste it with repeated calls or long waits on the phone. If you don’t have respect for their time, it won’t be long before they decide to find another company with better service and faster resolution when a problem does occur. Be smart. Respect your customers’ time and always fix problems quickly—and with the right attitude!