by Rick A. Conlow 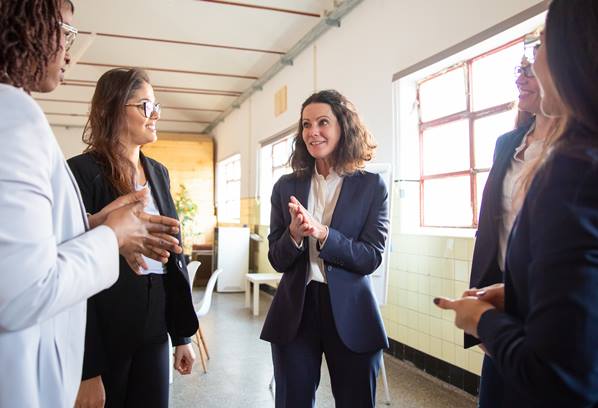 Here are ten statements that leaders say regularly that show they care about their people more than their title.

Good managers are different from other bosses. If you have had one lately you probably noticed they have high standards, are upbeat, knowledgeable and straight talkers.

You will get the feedback you need to succeed. If you are lucky enough to have one you will want to excel, because you believe in yourself a little more when you are around them.

A key attribute about good managers is that they talk differently than their colleagues, and that adds to our sense of empowerment.

Here are ten statements that good managers (real leaders) say regularly that shows they care about their people more than their title.

Yes, some leaders actually say that once in a while instead of something like “What have you done for me lately?” I had one that used to say, “How much money have you made me today?” All employees want to be part of something bigger or grander than the everyday grind, and it’s nice to know work can be that something. Leadership is influence, and it’s either positive or negative. There is no neutral.

It seems this is a novel concept, to communicate the overall goal of the work team, department, or company. It gives the big picture to everyone’s job and the why. Good managers do this concisely but with passion, not matter what the work is. Plus, they think bigger. It is also important for on-going updates, telling everyone on the team “Here is how we are doing.” With mediocre bosses every day is “same old, same old.”

Few managers are good at providing clear goals and expectations. Our research shows that 80% of performance problems are because of a lack of clear expectations and goals. The best managers also say, “Let’s talk about your progress,” and not “Let me give you some feedback.” This means LOOK OUT! The excellent managers adhere to this quote by Pat Riley, President of the Miami Heat: “A coach must keep everyone on the team in touch with present-moment realities- -knowing where they stand, knowing where they’re falling short of their potential, and knowing it openly and fairly.”

We all need someone to believe in us. Good managers give encouragement, and they challenge you to do the better. I had one that would say, “You can do it, let’s keep hustling.” I had another one that used to sing the song, “Sixteen Candles” down the hallway. Then he’d come over and praise me about some goal and head back down the hall singing. It set a light tone to our brief meeting. Poorer managers always seem to be about bad news.

People want to be appreciated. A simple thank-you often is enough. ‘Great job on…’,’keep up the good work…’ are also other ways they recognize but they do it regularly and sincerely. It’s hard to get a compliment from other managers. It’s documented that genuine praise works, plus it’s the right thing to do.

They are willing to talk to you. Mr. Jim Low was a master at this. When I first met him, his legend preceded him. For over a decade he led his market in profit, sales and employee retention. I asked why he was so good. He replied by laughingly saying, “I didn’t go to college.” He added that every day he’d come to work and first go talk to as many employees as he could by asking, “How’s it going?” He might relate this to something he knew about the person. The employees mostly talked about their lives. He discussed business only if they brought it up. Then, when he had a problem, he would go to employees and get the straight info, no BS, because he already had a positive relationship with them.

Considering the pressures of our jobs and the need for innovation and improvement, why wouldn’t a manager ask this question of his or her team members often? Here are two reasons to do it. First, you don’t want people bringing all of their problems or concerns to you. There isn’t enough time. You have to train them to problem-solve and become solution focused. Second, they will become more proactive while improving their performance. Most employees are astounded when their managers ask this question and reply, “What?” Sadly, less effective managers are fearful of the answers or don’t care. Famed basketball coach from UCLA John Wooden said, “It’s what you learn after you know it all that counts.”

This is the next logical question to ask a team. When you do, you begin to get their buy-in and commitment grows. They want to achieve their goals for their reasons too, not just yours. Each employee has untapped potential for great ideas. Why not ask? The best do this and their employee engagement and productivity soars.

Nobody’s perfect. Good bosses admit it when they screw up and even apologize. Obviously, they aren’t making so many mistakes that they are apologizing all of time. I put this in here because it is so out character by leaders to do this at all.

I was at a conference a few weeks ago where a manager talked to his team about a marketing campaign that failed. The manager owned the failure, and said he was sorry to his team because he really pushed for it. Because he had trust with his employees, they got through it. In addition, by learning from this situation and collaborating they created a better plan-that worked. When was the last time you heard a manager say, “I made a mistake”?

Sometimes managers say this to their teams, but more often it’s about self-glorifying their success to a boss or colleague. That gets around, and their credibility is destroyed. However, the managers that highlight their teams’ efforts and give credit to them for any victories are golden leaders. A leader’s success is all about the team. In the movie “The Mighty Ducks”, Coach Bombay tells his team,” A team isn’t a bunch of kids out to win. A team is something you belong to, something you feel, something you have to earn. “With low employee morale and engagement in many companies, this is a valuable lesson that most managers have yet to learn.

Pulling It All Together

Napoleon Hill declared, “Think twice before you speak, because words and influence will plant the seed of either success or failure in the mind of another.” Hopefully these ten phrases give you a lift, and helps you build your team up, not down like so many other managers do. Let’s not forget another quote filled with wisdom, by Emerson: “What you do speaks so loudly that I cannot hear what you say.”

What phrases or statements do you hear good managers say-often?

Rick Conlow is CEO & Senior Partner of WCW Partners, a performance improvement company. Based in Minneapolis/St. Paul, Minnesota, WCW works with clients in a variety of industries worldwide to help them excel in sales, service and leadership, facilitating business growth and vitality. Rick is author of Excellence in Management, Excellence in Supervision and Returning to Learning.